Welcome to Eagles! We hope you enjoy looking at our learning on this page!

Please remember our home learning is always due in every other Thursday and will be sent back out the next day. For more information on home learning please visit our school home learning section under the children tab at the top.

Please ensure they bring a water bottle into school. Please ensure your child is dressed in their PE kit with their school jumper on our PE day.

Eye of the Wolf by Daniel Pennac

Born worlds apart: a wolf from Alaska and a boy from Africa…

Our writing has been based around the book Eye of the Wolf. Children have written their own narratives, rewritten parts from alternative views and created non-chronological reports about wolves. Here is what we thought of the book:

-It was really interesting finding out the different backgrounds of the characters.

-We were able to find out different points of view and see things from different character’s perspectives.

-I recommend this book because it was interesting and there was lots of action and detail.

-The story was well-developed and gave you lots of detail about the characters.

-It is really good for people who like adventure stories.

See examples of our writing and art below:

During term 2, the children were learning about why the second World War started and how the lives of people changed during this period. When learning about how the lives of people were affected, the children created menus - using rationed food. They looked at propaganda posters linked to the 'Dig for Victory' campaign and analysed the effectiveness of these posters.

Further to learning about the Blitz, the children showed their understanding of how children felt during this time by writing diaries from the perspective of a child in WW2, explaining the impact that the events had on them.

Letters from the Lighthouse by Emma Carroll

We weren't supposed to be going to the pictures that night. We weren't even meant to be outside, not in a blackout, and definitely not when German bombs had been falling on London all month like pennies from a jar.

After months of bombing raids in London, twelve-year-old Olive Bradshaw and her little brother Cliff are evacuated to the Devon coast. The only person with two spare beds is Mr Ephraim, the local lighthouse keeper. He's not used to company and he certainly doesn't want any evacuees. Desperate to be helpful, Olive becomes his post-girl, carrying secret messages (as she likes to think of the letters) to the villagers. However, Olive has a secret of her own. Her older sister Sukie went missing in an air raid, and she's desperate to discover what happened to her. She finds a strange coded note which seems to link Sukie to Devon, and to something dark and impossibly dangerous.

Eagles have been lucky enough to have a visitor from the British Red Cross to teach them some basic first aid. The children were put into groups and each group was given a different first aid scenario. After working with their groups, they then had to act out the scenario they had been given to the rest of the class.

The topics that they covered were:

They learnt when to call 999, and how to deal with each situation. They also got to practice putting someone in a recovery position and got to try CPR on a resuscitation manikin.

The whole class said they would feel more confident in dealing with a first aid situation after the training.

“It was fun and I think I will be more able to deal with some first aid now.”  Charlie

“I learnt how to approach different issues.” Rossi

For homework children created their own questions to investigate different aspects of their topic  electricity. They choose how to present their research and came up with some very inventive ideas!

Subsequently they have  been learning about circuits and how they can be used to create a game which children can play. They made their own games and included a circuit so that children could get an instant response to a question. They then visited Kingfishers class and shared their games with them.

This is what Kingfishers had to say;

Your game was really fun, when we got the question right we got a reward (a penalty kick). Eliza

I like how all the wires connect up to make the game work. Jayden

I like the decoration it made me feel as if I were in the game.Samuel

From the fascinating Pharaohs to the power of the pyramids, discover the foul facts of death and decay with the meanest mummies in Egypt. Are you ready to rumble with Ramesses the Great? Dare you enter through the Gates of the Afterlife? It’s the history of Egypt with the nasty bits left in!

Here is what the children had to say:

It was very educational, but it added in humour to make it more fun for us to learn from.

I learnt a lot from it even though there were only 3 people doing all the parts.

I really liked the 3D parts even though it made me scream.

I liked it when the made the mummy then the mummy came to life and told us all about the journey to the afterlife.

The 3D effects really brought it to life!

I liked it how they used songs throughout the play.

We learnt about tomb raiders and traps and secret passages that were hidden in tombs.

I liked how they mixed the modern world and Ancient Egypt together.

For French this term, Eagles have been following a unit entitled ‘Ma Ville’ (‘My Town’). It focusses on the southern town of Montpellier, and some of its young inhabitants who take you on a tour of the various sights. It introduces the vocabulary of places in a town, compass directions and what the children like to do with their time.

*Tu viens a l’école comment? (How do you get to school ?)

They also had a go at some tongue twisters – can you say them without getting mixed up ?

In RE, we have been learning about the impact of influential people on our lives. We identified a number of people who have changed the way we live our lives today. We discussed, at length, the people in the world today, who will shape the lives of generations to come.

Nicholas – In the project, I learnt how to text wrap an image so that the text was in front of the image and we could move it anywhere. This meant the presentation document was more appealing to our Year 6 audience.

Jaylen – I have learnt that sometimes people have multiple influences over others. This can affect the way that they live their lives and define who they are.

Year Six went to Cobham Hall to participate in this years Safety In Action.They were split into four teams and took part in ten different activities;including,fire safety,water safety,rail safety,road safety and drugs and alcohol.They also learnt some basic first aid,what to do in an emergency and how to put someone into the recovery position.

On Wednesday 29th July Eagles class participated in an architecture workshop. As they are currently studying islands, their challenge was to design and build a shelter for one of three different islands; Iceland, Madagascar or Tenerife. Depending on the island they agreed upon, there were certain criteria that they had to meet to deal with that islands climate.

Iceland-shelter had to have an entrance and keep you warm

Madagascar-shelter had to be off the ground

Tenerife-shelter had to have a separate living and sleeping area

All the shelters had to accommodate the whole team.

At the end of the session all the shelters were tested to see if they were sturdy enough to withstand the weather on the island and points were awarded for extra design features.

The winning shelter was for the island of Madagascar and was designed and built by; Aryan, Emmanuel, Owen, Ralfie and Ryan.

As part of their topic work on WWII, Eagles class had a visit from the Freshwater Theatre Company, who ran a workshop to help them imagine what life was like for wartime children.

They participated in drama activities to experience different aspects of the war, including air raids, rationing and evacuations of Home Front Britain. The class all agreed that the workshop had really helped them to empathise with the experiences of children living through the war.

We have been focusing on the world of sport for our dance unit in P.E.  As this year has been the year of the Rugby World Cup, it seemed fitting that our dance should be based on the traditional ancestral war dance of the Māori people of New Zealand – The Haka!

Our version began with a simple Haka style routine over 16 beats.  Our key words to think about during creating our own versions were power, intimidation, calmness and control.  It grew and grew over the weeks, until finally we were in three teams of ten, all challenging each other to battle.

Each team chose to personalise their Haka in various ways, including team formation, starting and finishing poses and rallying war cry. 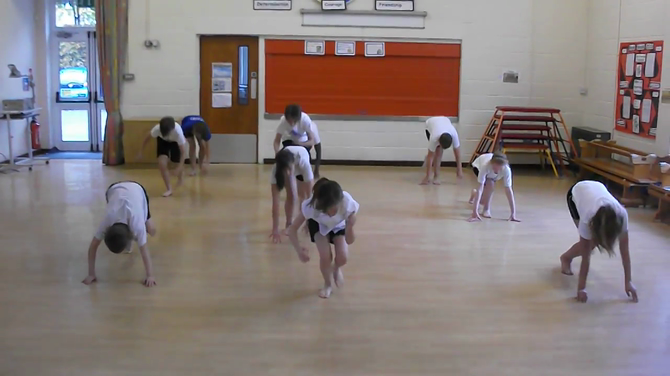 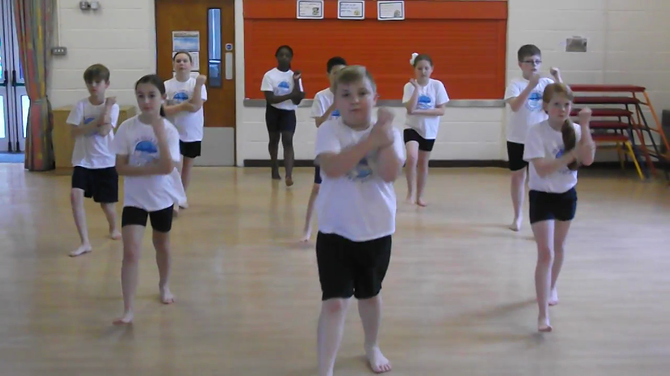 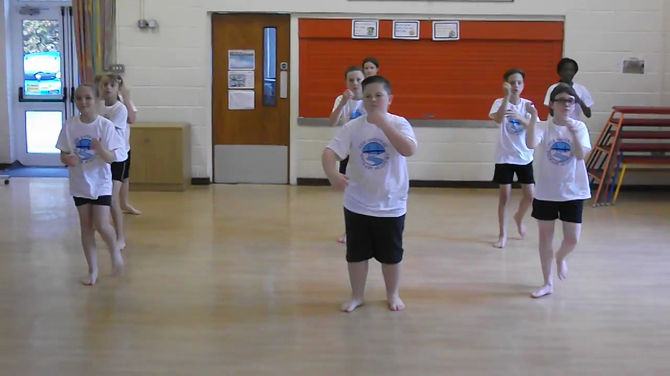 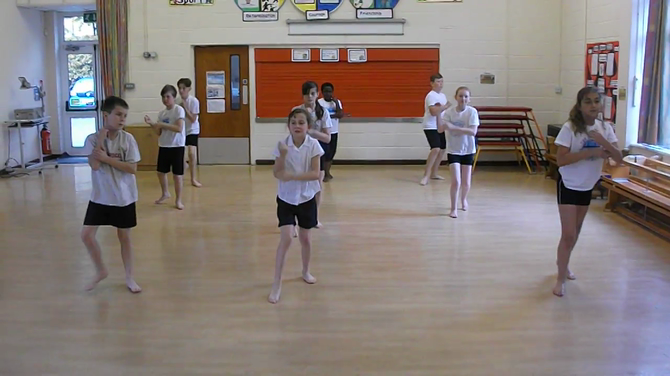 In English we have created slogans and advertisements for our games which we made in science and design technology. We reviewed a range of radio adverts and worked out what was memorable about them and tried to include these features in our own adverts. Have a listen and let us know which ones you remember!